Layovers are one of the most frustrating and time-wasting parts of travel, right? Not always! For the improvisational traveler or backpacker, layovers and transfers can become quick adventures to help you get even more out of your travels. Naturally, this doesn’t apply as much to travel by plane as much as travel by train or bus due to the time constraints of security checks and the like. In many circumstances, especially in European towns, even an hour layover can be well spent!

Considering almost all of the travel I did within France was by train, I had the opportunity to figure out things to do with myself while waiting for the next train to whisk me away to my destination. For this trip, I had purchased a Eurail Global Pass in order to give myself the largest extent of freedom to travel and even though I didn’t end up visiting other countries, I wanted to be prepared. The Eurail/Interrail company has a really useful app in order to view train schedules as well as routes and an interactive map to find destinations which is what I used for the entirety of my trip planning. Getting to see my layovers/transfers ahead of time was also really helpful to try and use my time as wisely as possible.

Most of my layovers were fairly quick so I didn’t really have to wait more than 20 minutes for my next train. For those, I simply grabbed a coffee or snack while I waited. However, I had about three layovers that lasted about an hour or so that gave me the freedom to quickly head out and explore a bit. (This is where traveling as light as possible was helpful because all I had was my backpack rather than luggage.)

The first layover I used to my advantage was in Le Mans. There’s a ton of history surrounding this city involving warfare, sieges, and the birth of a king (Henry II Plantagenet). I remembered reading a lot about Le Mans while doing my research for my trip and while reading about the history of conflict between England and France but for some reason I didn’t remember much about it until I was scheduled to have a layover there. With what little time and cell phone service I had on the train to Le Mans, I tried to see if there was anything near the train worth venturing out of the station to see (there almost always is). The first thing that came up was what’s called Vieux Mans or la cité Plantagenêt. The historic, medieval city of the Plantagenets. Boom, interest piqued.

Fair warning, the old city is a bit of a walk from the train so you’ll have to walk quickly or if you have the extra cash, catch the light rail through the city. I didn’t really take the time to figure out the light rail schedule, I’m a naturally fast walker so I just headed out. The old city is quite small in comparison to the rest of Le Mans but well worth the walk. The streets are narrow and steep and cobbled as they would have been in the Middle Ages. There’s a handful of restaurants, cafes, and stores lining the streets as well as the Musée de la Reine Bérengère with a beautiful little courtyard. 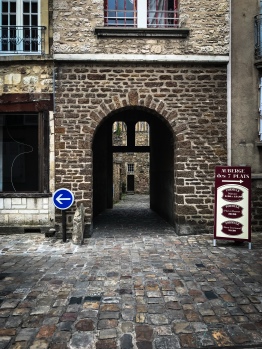 There are so many other things in Le Mans I would have liked to see but unfortunately, I didn’t have the time to actually stop anywhere. I only had the time to do a quick walkthrough of the old city and head back. Though, instead of sitting and waiting in a train station for that hour, I was able to take a peek back into history and to make note of a city that I would very much like to visit in the future.

On my way to Arles to see the plethora of old Roman and Medieval monuments, I had to transfer to a bus in a small town called Tarascon (sometimes called Tarascon-sur-Rhône). Again I had about an hour to use and again turned to my maps app to help me figure out what to do with myself. Now I’m not entirely sure how one of the best-preserved castles in France could have escaped my research (I know right? With my obsession? Mind blown) but it did. Not only that but it was only about a ten-minute walk from the station! The walk takes you past St. Martha’s Church (Église collégiale Ste Marthe) and along the river to the castle. I didn’t get to go inside the castle itself but you can enter the courtyard and peek around. I walked around the side of the castle to get a look at the river and wasn’t disappointed. The Rhône is such a beautiful turquoise against the dark green of the trees and the light cream color of the stone of the castle. I wish that I had the time to visit both the castle and the church but again I added another destination to my list of cities to return to.

The last city I explored during a layover was one that I had already seen but wanted to see more of. Rouen very quickly captured my heart. In between some newer buildings, groups and alleyways of half-timbered houses lean out over the street. Known for its history in the conflicts between England and France, especially as the city where Joan of Arc was burned at the stake, there is plenty to do and see, including an escape the room game in the ancient Donjon de Rouen. This time around I only had about an hour but I didn’t have monuments to get to. Instead, I just wandered the narrow pedestrianized streets in search of a cafe with a nice view. Even if you only have time to wander from the train station down to the Seine and back, you won’t be disappointed!

In the end, if you do a little bit of research (which is as easy as just pulling up your maps app and seeing what’s around) you can turn what would have been time spent sitting in a chair into a mini adventure to really get the most out of your hard earned trip!