–Why did you go to this place?

There are actually quite a few reasons why I chose to go to France as my first solo trip. I think probably the foremost reason on my mind when I was choosing a travel destination was the fact that I already speak the language. I started learning French in high school and thanks to working in places where I’ve met people from different nationalities across the globe, I’ve been fortunate enough to make friends who are from France which allowed me to continue to practice. It made the idea of being in a country that doesn’t have English as their primary language a lot less daunting, especially being on my own.

The second reason I chose to go to France was the history. Now obviously France doesn’t have more history per se than other places, however, I’ve always found myself fascinated with the history of that particular country. The history behind the Celts, the Romans, the barbarians who invaded during and after the fall of Rome, and the many kingdoms and duchies that became the conglomerated country we know today is riveting. In particular, I am a huge medieval history fan and so many vestiges of that time period still remain. I am so obsessed with castles (which I very quickly learned was a bit tough if you wanted to see ones that are still standing. So much internal conflict caused many of the castles to be razed to prevent local lords from holding any power against the king, as well as the destruction from multiple wars with neighboring countries.) The massive amount of ancient cathedrals, castles, and even houses was staggering and more than enough reason for me to want to spend months just wandering around France. I started researching the castles alone and fell into a rabbit hole. Originally I thought it would be a really good idea to plot the castles on a map of France, color-coded by the century built so that I could see where there were large numbers of castles and spend my time there. Little did I know that this project would end up taking me months to complete. In the end, I’m glad I did it because it was really interesting to see which areas of the country were chosen as strategic for castle building. As far as actually visiting many of these sites, it was absolutely enthralling to imagine the things that happened everywhere I went. Standing in the cathedral in Reims where so many French kings were coronated left me dumbfounded. History really is one of the biggest criteria for me when it comes to choosing my next destination. 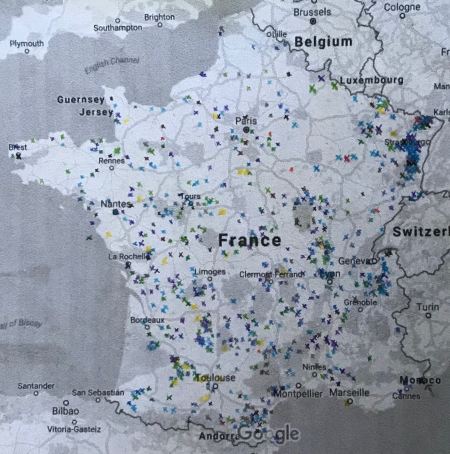 The third reason (and really no less important than the other two) was for the food and the wine. France has always been known for the wonderful foods that are steeped so heavily into its culture and history. Just like anywhere else, the food varies vastly from place to place, though many staples you can find anywhere you go. I really attempted to try new and local cuisines and wines everywhere I went (because why go to another country and try only the things you’re familiar with? Kind of defeats the purpose, no?) Unfortunately, I didn’t get to any caves or vineyards to do wine or spirits tastings (I almost went to the Château de Cognac because it has so much history but also because what better place to do a cognac tasting?) because I had so many other things to see but the next time I go back, when I revisit some of the cities I went to you had better believe I will be making a trip to the local caves and cellars, especially somewhere like Reims where the champagne cellars are abundant. I think this was one of the hardest things for me to leave behind when I got on that plane. We have some truly great food in the states, don’t get me wrong, but so far nothing compares to the foods I had in France.

Lastly, I have always wanted to eventually live in Paris, at least for a few years, so it only made sense for me to try to scope out my (hopefully) future home. I very much consider myself a nomad and don’t really ever see myself spending more than a few years in any given city and obviously, it really helps to visit somewhere before you move there. Since Paris was always high on my list of places I would like to spend a few years I knew I had to go sooner rather than later. And boy am I glad I did!