I scheduled myself three full days in Denmark, with which I wanted to explore Copenhagen and trek to the Viking mounds in Jelling, but the last option was in the air. With a short train ride from the capital, I could see a Viking ship museum, the city and castle Shakespeare’s Hamlet were based on, or I could take a ferry to Bornholm (which holds particular interest to me as it has long been thought that Bornholm is the origin of the people who migrated to the area near the borders of modern-day France, Switzerland, and Italy to form the Kingdom of Burgundy!) I was torn between the three options but told myself to remember that there’s always the opportunity to come back again and see the things I didn’t the first time around. With that in mind, I decided to visit Roskilde since it was an easy 15-minute ride from Copenhagen. At the time that Denmark became a mostly unified nation, Copenhagen was not the capital. Roskilde remained the capital for a little over four centuries until 1443, around the time of a fire that destroyed a large swathe of the city north of the cathedral. The city was founded around a handful of springs which are considered sacred and many are still preserved, visible, and flowing to this day (though they now have signs advising not to drink the water). Up until the time of the Reformation, the city was not only the administrative capital but also the ecclesiastical capital of the country, hence the importance of the cathedral there.

The cathedral in Roskilde was unlike any I had ever visited before. From the outside, the architecture was the first difference I noted. Most of the cathedrals I’ve visited have been in the vein of the French Gothic style (think Reims, Amiens, Chartres…) The structure is made up of small red brick, instead of the typical large cut stones. Upon seeing the western façade for the first time, I also noticed the lack of a rose window. However, the shape of the building is similar to those of Gothic design.

The interior is also very different than most of the cathedrals I’ve visited. It is very apparent in the design of each room that the complex had been built up in different ages. One of the most fascinating features of this particular cathedral is that it is also the royal mausoleum. 40 kings and queens of Denmark are interred here, as well as the future tomb of Queen Margrethe II, which is covered by a piece of art until her royal interment. Even Harald Bluetooth is buried here, though his tomb is a bit challenging to find without the help of the pamphlets.

The number of entombed royal family members is almost creepy, though I do love a bit of the macabre. One of the underground crypts was the creepiest because it was dark, cold, and I was alone. All the caskets were covered with white cloths. The beautiful and almost bright design of the cathedral, though, is a stark contrast to the vast number of caskets and effigies. It was truly fascinating to see the balance of life and death so graciously held in the same space. 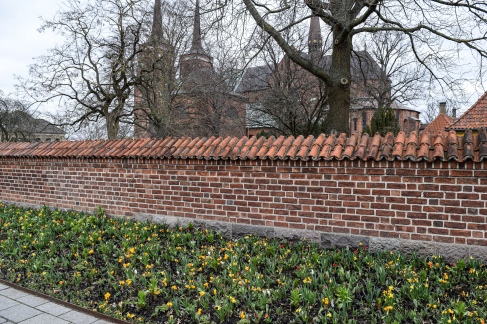 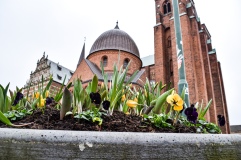 There are a few places in pretty much every country I’ve been to where I get hit with the “I can’t believe I’m here” feeling. And I think that’s relatively normal, especially when travel is still somewhat new. In Denmark, I got that feeling any time I was near historic Viking locations. One of these locations happened to be about half of the reason I visited Roskilde in the first place: the Viking ship museum.

Downhill from the city center, the train station, and the cathedral, lies the Roskilde Fjord. In the 1960s five ships were discovered, sunken in a line across one of the narrow passable channels. Surprisingly, after around 900 years, many large pieces of the ships were still intact. These pieces were painstakingly preserved and put back together over wooden skeletons in order to give visitors an idea of what the ships must have looked like so long ago. These are part of a handful of exhibits about the history of the Vikings both in Scandinavia, and abroad.

Throughout my historical research, I’ve grown quite fond of the Vikings as historical figures. What we know of their history is bloody and fierce, but what’s interesting is just how much power they exerted over much of Europe, extending as far as Asia Minor and even North America. I couldn’t quite travel to Denmark without seeing some of the origins of the legends I found myself drawn to reading. It’s a shame that I visited so early in the year, because, in the summer, you can ride around the fjord on replicas of the Skuldelev ships (definitely a reason to come back!) 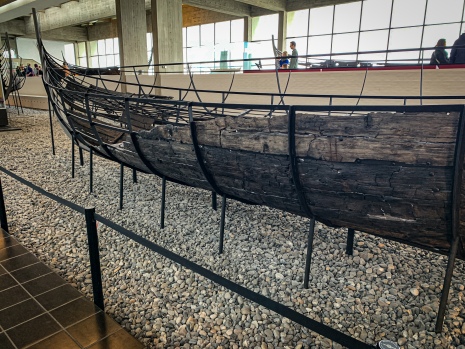 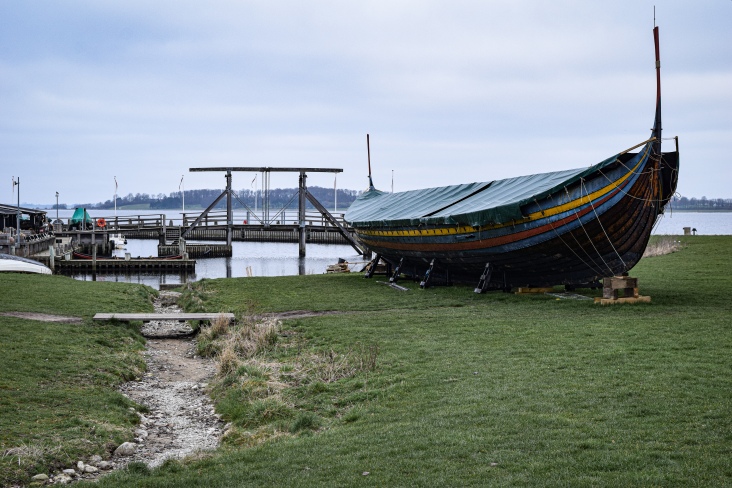 The city of Roskilde is full of history and beautiful architecture, as well as plentiful natural landscapes surrounding the fjord. The story of how the city was founded, built up, and changed over the centuries, as well as the Viking presence is enough to make any history lover happy. If you’re in Copenhagen, I highly suggest you take the short train ride to visit Roskilde. You won’t regret it!