Hooray from my first post from abroad! I’m writing this shortly after my friend Brandy and I walked home from the Grand Roue (big wheel) on the bank of the river in Montreal. I want to preface the next part by saying that at one point I worked rollercoasters in an amusement park and at another, I was a lighting technician way up above stages in narrow and sometimes terrifying or precarious catwalks, so I’m not afraid of heights. However, Ferris wheels have always made me nervous. I really can’t explain what it is about that particular method of elevating ones’ self above the surrounding area but I’ve never enjoyed those rides. In certain places though, they are just about the single best way to see the city from above.

Montreal has about four places available to the public to get great panoramic views of the city from above, but arguably the two best are the lookout point on Mount Royal and the top of the giant wheel. I’m sure the daytime would have been pretty too but we chose to go at night because many of the surrounding buildings are lit up. The wheel sits in the Old Port of Montreal which is directly adjacent to Vieux Montréal or Old Montreal which is by far my favorite neighborhood. From the top of the wheel, you look out over the river on one side, and at the mountain on the other. The cross that sits atop Mount Royal is lit up and is large enough to see even from here. It really is one of the cooler things we’ve done since we arrived. However, the thought of getting on the wheel made the both of us tremendously anxious.

I knew I had to do it because it’s important to step out of your comfort zone when you travel. I mean, why even leave your home if you’re not going to try something new? Things that make you anxious make for especially good memories. So, onto the wheel we went. The first few seconds before we left the ground were very calm. As soon as we passed the pylons though, the nerves kicked in. I could feel my heart beating faster with every foot we rose. Brandy was practicing breathing to stay calm. We both refused to move because we didn’t want the cabin to rock. If we had a video of the ride, I’m sure we would both have a good laugh at ourselves.

The first time around the wheel I focused on taking pictures because it calmed me down a bit. My hands were a tad shaky but I knew it would help my nerves. By the end of the second revolution, we were enjoying ourselves and moving around a bit more to get some better pictures. At one point, Brandy suggested we dance to alleviate the anxiety. I laughed because I was not about to rock that cabin any more than shifting slightly to take a picture would have. It wasn’t until we were coming back down for the last time that we saw the signs that said not to move around anyway. It was only our second day in Canada and we were already breaking the rules.

The last time around we put down our cameras and just took everything in. We had plenty of time because we were stopped at the highest point for what felt like an eternity. The views from up there are stunning. The whole city of Montreal comes into view and it’s not hard to see why the people here love their city. I’ve never seen a metropolis that has incorporated nature so well.

Afterward, we took some pictures in front of the wheel to celebrate. (Pardon the slight fuzziness of the pictures, it was dark and my hands were shaking from the cold and adrenaline.) We were proud of ourselves for convincing each other to get on in order to get such a great view. Though it might seem trivial to some, that small amount of nervousness can snowball quickly into full-blown fear so the fact that we attempted the ride and enjoyed ourselves is reason enough to celebrate. 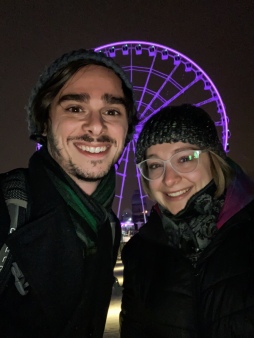 If you’re ever in Montreal, no matter the time of day or year, I recommend a ride on the Grand Roue. The views of the city are unrivaled. This particular wheel is the most smooth and stable (the cabin barely moved at all, even when we switched seats for pictures) I’ve ever been on, though that doesn’t say much due to the fact that I’ve only been on approximately three in my life.

If you’re traveling, do things that scare you. Step out of your comfort zone. Obviously, don’t do things that are stupid or unsafe, but I will always recommend doing something that makes you feel out of your element. The experience opens you up as a person and will most likely stay with you for the rest of your life.

One thought on “Overcoming Anxiety in Montreal”