Alright friends, the time has come for me to talk about what is quite possibly my favorite place in the whole world: The Dingle Peninsula. Part of me is extremely glad we skipped the Ring of Kerry because had we not, I probably would not have gotten to see the Dingle Peninsula at all. It took us the majority of the day to make our way all the way around but I’m glad it did, there was a lot to see!

We headed out of our hotel early in the morning and hit Ross Castle pretty early on! It’s a very neat castle near Killarney that’s been extensively remodeled and restored. The main part of the keep started off as housing for the O’Donoghue clan, changed hands a few times and eventually was used as a barracks. Unfortunately, I had just missed the guided tour to get to see the rest of the interior but what I did get to see was pretty interesting! I didn’t stay too long though because I was excited about the day of driving ahead.

For the majority of the drive around the peninsula, you’ll have mountains on one side and the ocean on the other. For most of the way, the land gives way to cliffs over the water, but here and there are some beautiful white sand beaches. We took some time to stop off on one of them near the town of Inch, but a storm rolled in while we were taking pictures so we kept driving. We decided to stop off in Dingle for a bite to eat. Dingle is such a cute little town with narrow little streets and brightly colored buildings. We parked the car and just wandered around until we found a place to stop. I tried to picture what life must be like in a quiet town like that. Next time I’m there maybe I’ll find an Airbnb and chat with the locals to find out. 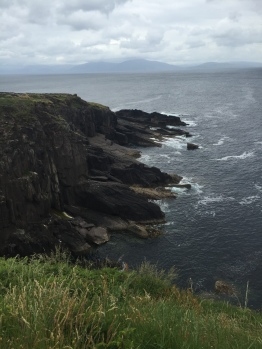 Once the weather cleared up we headed back out again. Along the way, we hit some cool little surprises. There are a few sites on the side of the road where ring forts, dating to over 1,500 years ago stand in little grass-covered clumps. It’s hard to believe that those tiny buildings were once home to entire families. It’s also amazing to think about the fact that those stones have been standing, largely unchanged for over a millennium. I kept the pamphlets (as I keep all pamphlets, maps, and tickets from my travels) and read them as I walked between the buildings. My aunt allowed me to borrow her camera since all I had with me at the time was my phone (not having a camera of my own is not a mistake I will make again). At one point, I had to hide inside one of the huts to keep her camera dry. For a moment, I felt like I was sharing a shelter with the ancient Irish people. Cheesy I know, but the same need for shelter drove me to exactly where they had been so long ago.

It was a little way down the road where I found maybe the most beautiful landscape I have ever had the privilege of witnessing. We were driving down a road called Slea Head Drive when we found a little car park near a white sand beach and some nearby cliffs. I didn’t see any signs to tell us the actual name of the site but when I searched it on google maps, it showed that the place we had stopped was called Waymont and the little peninsula we took pictures on was part of what’s called Clogher Head. The weather was nice and we saw a great opportunity for some photos. My aunt opted to stay near the car but I decided to go on a little hike to see what I could see from a little farther out. 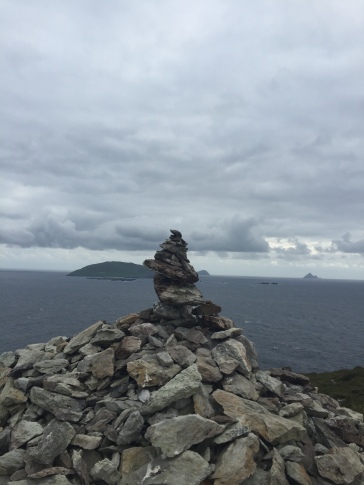 There were narrow worn trails showing that I wasn’t the only one to have gone this way. I hiked uphill from the car park towards the water. Along the way, there were cairns littered about the hillside. I had never seen anything like it! I climbed up to the highest point and spun around slowly. Pristine, dark blue water surrounds the peninsula and the grassy hillside behind me was the brightest verdant green I had ever seen. Three small white sand beaches dug down into the cliff sides could be seen in the distance. I had never seen anything so beautiful. Here’s where it gets a bit cheesy. (Listen, everyone has their own way of experiencing things, don’t judge!) I threw my arms open and laughed. Keep in mind even though I grew up in a slightly more rural area of Ohio, I now live in New York City and I don’t often get to see untouched landscapes like these. Down by the car park, the breeze was light but up where I was, the wind was nearly knocking me over. It definitely took the breath out of my lungs, though that could have also been the emotion I was experiencing looking around myself.

Now I know I’ve talked about the spiritual connection one can have during travel. I mentioned how in Caerlaverock Castle I felt the presence of my ancestors even though it had been over 500 years since anyone had lived there and how I felt a connection with ancient tribal Celts who lived in the ring forts I had seen. Here on this peninsula, seeing nothing but mountains and endless blue ocean, I had two different experiences. I began to see and feel what felt like memories of at least one life passed. I saw images of the coast from out on the water as if I was seeing my home after a long time at sea. And then, I had yet another Emersonesque transcendent moment in which I was no longer connected to my own physical body but felt like I was just another part of the universe and the energy that had created the beauty around me. I tried, at one point, over a year later to write a poem to capture the emotion of the moment but honestly, words don’t really do the feelings justice. That being said, I’ll include part of it anyway.

“I stand on a pinnacle of rock arms outstretched and eyes closed.

The wind whips around me ruffling my clothes and tugging at my breath.

No. Not tugging. Yanking and pulling.

It feels like the universe is coaxing me out of my body.

I exhale and let myself go.

I roar with the wind and what’s left of my breath.

I dance with exaltation as I rise up the cliffs with the sea spray.

I sway and bend with the grass.

I float lazily in the sky with the clouds, surveying all that I am.

I am not a body anymore.

The only thing that brought me back was my aunt calling me. Apparently, I had been gone for a while and she was worried due to the strong wind (and me saying I would only be gone for five minutes. So we continued on. It was hard to think of anything else after the experience I had just had but there continued to be stunning views to take in the entire way.

At some point along your journey around the Dingle Peninsula, unless you turn back and head down the same road you drove in on, you’ll have to go over Conor Pass. Even if you didn’t, I would still highly recommend it. The drive up (and back down) is one of the scariest I have ever experienced, solely because of the fact that you are driving on a two-way road that is wide enough only for one car. You read that right. Two ways, one car width. Now if it was just short distances like that, it would have been fine, however, it was pretty much the entire way over and down the mountain. Once you get to the top, the view is striking. You can see for miles around and all the way down to the water on both sides. Small, dark bodies of water dot the mountainside breaking up the bright green of the grass. It was surprisingly quiet up there, even with the stiff breeze. Unfortunately for the moment, I only have the free version so I cannot include the time-lapse video I took of the drive down but believe you me, it was a bit harrowing!

Once we reached Tralee, we had a choice to make. We figured we still had a few hours of sunlight left so we could keep driving and try to make it to Limerick (while hitting a few sights on the way) or stay in Tralee for the night. We only had two days left at this point so I wanted to try to push on and see if we could see the few things we wanted to before the sun went down.

We made it to Adfert with plenty of time to spare to take pictures of the cathedral there which is really neat! Parts of the grounds are still in use but the old cathedral itself is empty but maintained so that you can still visit the main grounds.

Unfortunately, we didn’t have quite as much time as we thought and our drive took a little longer than planned so the few castles we wanted to see, we only saw the outlines of and not the interiors. We drove down a road with no streetlights and no one else around to see a castle on the water. I’m sure in the sunlight it looked pretty amazing but at night it was creepy (and cool.) We could only make out the outline thanks to the moon, and it made the windows so much more mysterious. I half expected to see some sort of figure lurking in one of them. My aunt said she wouldn’t but I definitely would have gone inside! We got to see one more castle on the way to Limerick, this one a little bit lit from the outside but unfortunately it was undergoing renovations so a lot of scaffolding blocked the view.

We rolled into Limerick in search of a hotel at around midnight that night. Needless to say, after a full day of driving, exploring, and experiencing a lot of the Wild Atlantic Way, we were exhausted and ready for bed! So far, this was my favorite leg of the journey. We saw everything from cliffs, mountains, and beaches, to ruined castles, cute towns, and ancient buildings!

Next up, more of the Wild Atlantic Way, Joyce Country, and Galway!